Jeremy Paden: On this Fault, Let Us Write a Poem

Here is a stand, let us sit for a night
or two or three in silence before we speak.
I wish it were a copse of blue-flowering lignum,
shedding petals that float like butterflies,
or the ceibas under whose canopies Anacaona
and Guacanagarix held court, or the guayaba
and guanábana that fed Guarocuya’s rebels,
even the bushes and shrubs Mackandal
used for his potions and powders,
anything but this grove of felled mahogany.

Let us stay a while in this denuded place
and write a poem that will not forget Haiti.

Haiti, I see you in a t-shirt that says
Phillies 2009 World Series Champs,
bending over a bucket of lard and clay
and salt, making mud pies to sell at market.
I hear you in the laugh of the boy
with whom I played soccer one summer day
on plains made barren from centuries
of slashing and burning sugar cane.

Haiti, there are stories that we keep
under lock and key in a cupboard.
In that cupboard, beside your bananas,
beside the green cane we no longer grind down
to molasses and refine into sugar,
beside your double-pot distilled rum,
we keep you, wasting away on mud pies.
And every once in a while we crack open
the door and yell,
“Stop cutting down your trees for firewood!”
Never mind that you have no electricity.
Never mind that a stove costs more
than you will earn in a lifetime.

Let us write a poem that will haunt us
like Tonton Macoute, even after all
the children have been adopted
and the halls of government have been rebuilt.

Haiti, how many wrongs can one poem right?
Can a poem reforest your hills,
keep tectonic plates from shifting,
undo a dam that forced a valley of people
to leave their fertile fields for slums?
Can a poem resurrect your creole pigs?
Can it redress centuries of misrule?
Can a poem give you a livelihood
where you do not have to peddle
your goods to tourists, squeezing
the last penny out of their vacation funds?
Can it settle in and disrupt our lives
like chagas disease?

Can a poem, like a strangler fig or mangrove,
send down roots from the sky?

Let us write a poem that will change our lives,
a poem strong enough to endure
the pressures of the fault on which it stands.

Jeremy Paden was born in Italy and raised in Central America and the Dominican Republic.  He is Assistant Professor of Spanish at Transylvania University in Lexington, KY, where he lives, teaches, and writes.  He is also a member of the Lexington-based writers collective known as the Affrilachian Poets.  His poems have been published or accepted for publication in Borderlands: Texas Poetry Review, Atlanta Review, Christianity and Literature, Lone Star Legacy, and various anthologies. 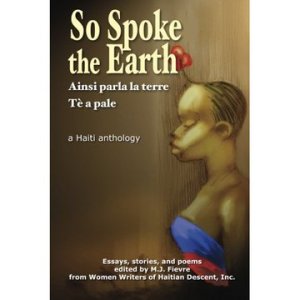 Originally posted on COUCOU MAGAZINE:
Click on pictures to access stories. Comment recycler les pneus The Magic of Rebirth/Wisdom of the Eagles ? ? This is Leonise as she stands in front of the small home in Haiti she shares with 11 other family members. Leonise’s angelic voice and endearing story of an impoverished yet…

More Posts from this Category